Which bottle or cup for each stage 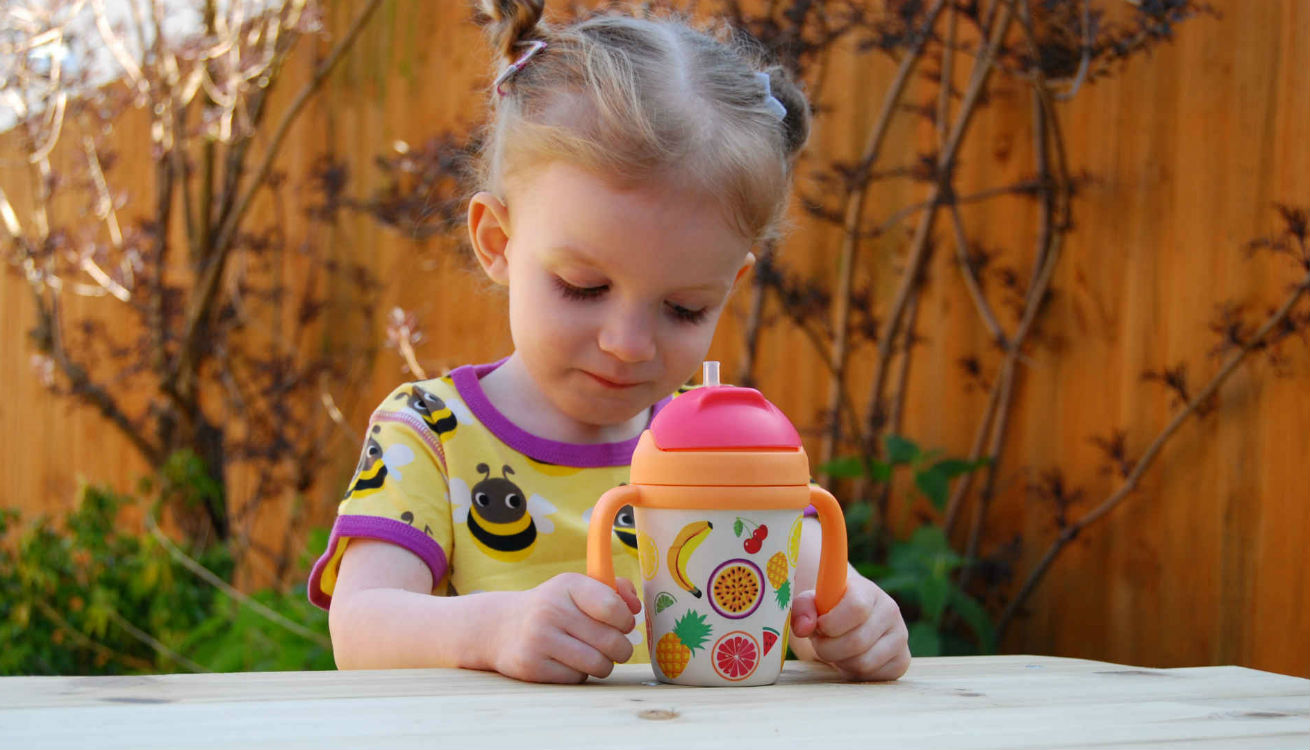 Cups, beakers, sippy tops, bottles... The list can be endless when you have a kid in tow. And let’s face it, darn confusing at times too. We’ve all wondered when they should be switching from a bottle to a sippy cup and then to a big kids one. That’s why we’ve put together a guide on what cup you need for each stage. Cheers!

Bottles for 0 to 6 months

If you’re breastfeeding you won’t need anything at this stage, so just relax and enjoy the experience. 😊 However, if you’re planning to express milk, you may find that they may not take to the bottle straight away. And this is where Comotomo bottles can help. Designed to closely mimic natural breastfeeding, these bottles have naturally shaped, soft, silicone nipples. There’s also a skin-like, soft squeezable bottle body, which they’ll love to hold while they feed. Equipped with innovative vents that are smartly designed to prevent colic, they’re a great transitional bottle that can be used after breastfeeding too.

Straight into bottle feeding? Consider a bottle that starts their plastic free journey from day dot, as well as being long lasting. This Lifefactory 4oz Glass Baby Bottle is the perfect starter for newborns. Made from thermal shock resistant borosilicate glass, it contains no plastic. It can be frozen, then popped straight into boiling water without the risk of breakage, which also makes it great for storing and quickly defrosting expressed milk. Long lasting, these bottles have been designed to fit a range of Lifefactory teats and lids, meaning the transition from bottle to that ‘big kids’ cup may go a lot smoother. Familiarity and all that...
Like the plastic free idea but not keen on glass? These Pura 5oz Infant Bottles are a great alternative. Made from stainless steel, there’s no nasties like BPA, pfthalates, PVC, or other petroleum products. When they’re done with the teat, just switch up to the sippy or sports cup lids. That's two plastic free, long lasting options right there.

At around six months it’s time to mark a whole new milestone. Weaning. And with this journey, comes the need for a brand spanking new sippy cup. Exciting! The easiest way to transition from a bottle to spout is to pick a soft one that almost mimics the bottle. You may also find that at this age, they’re not that great at gripping yet - so holding a cup is tricky. Opt for one that’s been designed with handles to help them out, this Babymoov Non Spill Cup with Spout features an ergonomic design with two easy-grasp handles. The soft edges will also keep their gums safe while they drink.

And a little note. To get them used to this transition, start by offering the cup at mealtimes and just filling it with water. It means they’ll be able to associate this with food, and as a result, not cry for their bottle. #justsaying.

As they’ve probably got most of their teeth now, that silicone spout may be riddled with teeth marks, or, if they’re anything like our toddler, they’ve managed to chew through the thing 🙈. As their drinking reflexes have developed, you’ll also find that they’re able to drink more without choking. This means one thing, it’s time to move them to the next level of cup. The Litecup Baby is (er, literally) a bright idea for little drinkers. Dentist approved it has a 360 degree spill resistant rim, which lets them drink from anywhere around the edge, saving the need for spouts or straws. If they’re still getting to er, grips with grasping, this cup also has easy to hold handles. The glitter design and the fact it lights up in the dark, is also a great way to encourage them to drink from something other than a bottle… sneaky? Yes. Effective? Definitely.

Once they near the two year old mark, they would have developed enough to understand how to drink through a straw. And this is where it gets exciting… Just choose a cup that will help them learn how to do this. The b.box Sippy Cup is a great pick here. It lets them drink at any angle thanks to the innovative weighted straw. It has easy-grip cup handles and the simple flip-top lid also means they can learn to be that little bit independent too. Awesome.

They’re drinking, sipping and er, probably spilling, till their heart’s content now. And they’ve probably mastered that straw too. The next step? The cup! Start them slowly on this journey with a beaker that’s easy to grip like these Cognikids Natural Drinking Cups. Using super-grippy toxin free silicone to help them hold onto them better, they’ll also teach them about cause and effect as they try to find their mouths and tip the cup back to get their drink out.

Genius, but not so much when you’re out and about. So stop the tears when they’re thirsty and those little leaks, by getting them a big kids’ bottle. The Pura 11oz Junior Sports Bottle. Sustainable and easy to use, it's a great pick.

At this age, the world’s really their oyster when it comes to cups. Their understanding of how to sip from a beaker is in full flow and they’ve got those grasping skills down to a T. Now’s a great time to introduce them to the world of beakers. This Liewood Bamboo Cups 2 Pack is made of bamboo meaning it’s eco friendly, plastic free and less likely to shatter when they chuck it on the floor.

And there you have it, a buying guide to baby bottles, sippy cups and beakers. Phew, it was thirsty work but we did it. 🤣

Bottles & cups for all 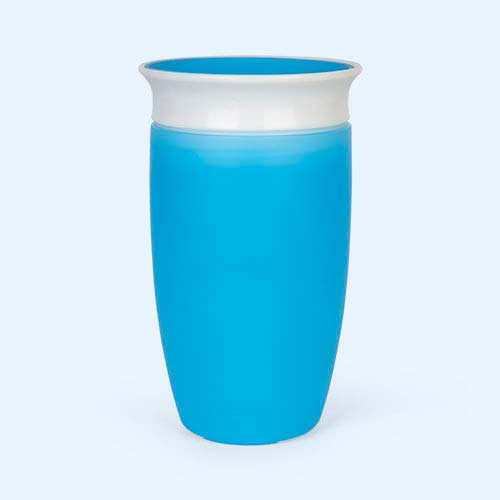 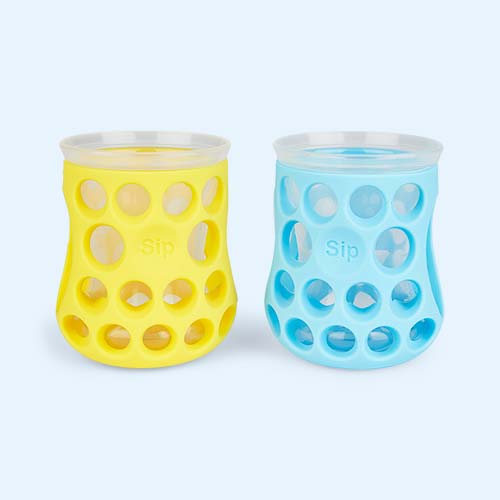 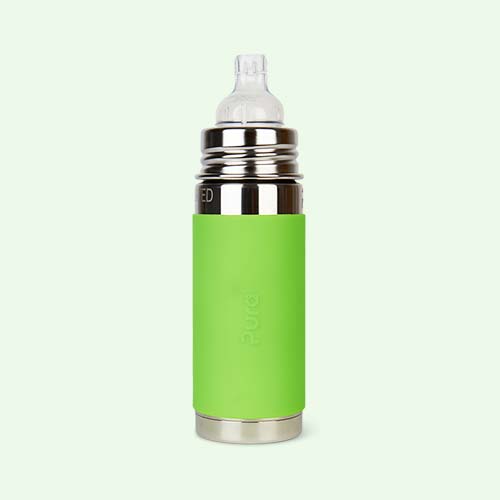 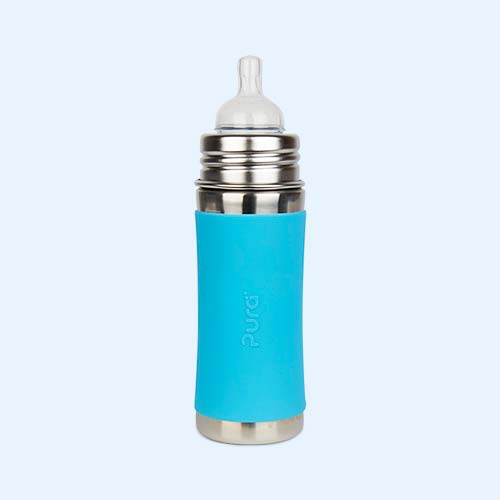 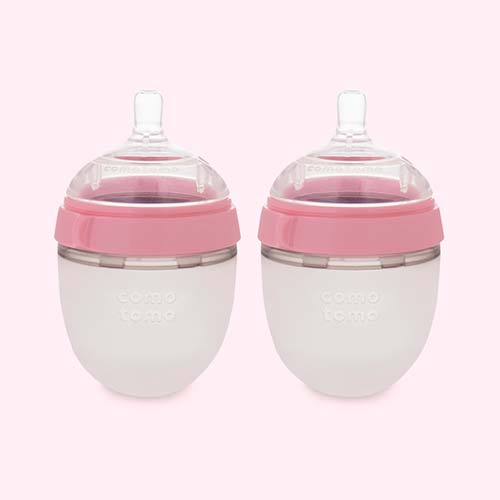